The next activity I wanted to do near Bangkok, was visiting a Floating Market. In my Lonely planet guide I found an option for the Damnoek Sudoak, however, there were mixed reviews online some appalling reviews, some actually very encouraging. I took my time wondering whether to go or not. In the end, the result of this overthinking was: I missed the opportunity to take it the last day I had in Bangkok, (because it must be booked at least two days in advance).

As I was not about to give up, I decided to stay one more day to do this activity. The option was to go independently, from the bus terminal, or an arranged tour with a travel agency. My contact of Couchsurfing advised me the second, because the market is quite far, more than 90 kilometers from Bangkok so it could be too tiring and longer to wait for public transport. And so, I did purchase through my Viator App, cost £27.20. Six hours half day tour. The local operator is Tour East (T.E.T.) Ltd.

The tour starts really early because the market closes at noon. I was picked up at 6:20 am at my hotel, and after being transferred to a central point, our group left Bangkok around 7 am. We travelled southwest, on an air condition coach for over one and half hours. Our guide, whose name I could not pronounce neither write, told us stories about Thai traditions and how the young generation is now moving to the big city for a “better” future and how Thai traditions can be lost in a near future. He mentions that this type of markets, although very touristy may disappear in the future. Along the way, we had a 30-minutes stop at a small Orchid and Coconut Farm and souvenir market.

When we arrived at Damnoen Saduak, we were transferred to a long-tailed speedboat for a ride through an area of low-lying land, surrounded by stilt houses, this took us approximately fifteen minutes. I can still hear the loud roar of that speedboat engine!

We then arrived at the market, where I found myself among busy stalls selling the same products than the ones I had seen at the Chatuchak weekend market, as well as many food vendors and restaurants.

It was 10 am, and our guide suggested us to take a small boat ride around the canals (for additional 100bath for 30 minutes) there and then as it gets very busy after 11 am.

I obviously followed his advice and joined one of the rides. At the market, I did notice that all the vendors are local, meaning that market is very important for their economy. The majority of visitors, like me, were foreigners, but I could also see a good number of Thais. The stalls offer a variety of products; from fruits, drinks, food, raw vegetables, spices, clothing, souvenirs, handicrafts, you name it!

During this visit, I could witness the real “art of bargaining” if you show the slight interest in an item or dare to ask the price to one of the stall vendors, then the chances of you buying such item are 98% guaranteed!  Thai vendors can be extremely good at persuading you. One of my fellow boat riders ended up buying a wooden craft elephant, for 400 bath, which she only bought owed to the persistence of the vendor (discounted from 1200 bath initial cost) after a ten minutes bargaining “heated war”! which was really entertaining for me to look at. The boat ride through the canals was definitely the highlighted of the whole trip, I really did enjoy it.

After the boat ride, we were given one hour to walk around the rest of the market. I enjoyed some noodles “brunch” at one of the many food stalls and sat down with two nice English ladies who were doing the tour with me. The “brunch” cost me 200 bath including the Thai local beer, Singha. However, after we finished eating, we were hastily escorted out of the area, not to say, “kicked out”, as they were hurriedly in the search for new costumers, we laughed and left the area.

This was a truthfully especial trip, which I would encourage anyone to do it ( anyone who is not afraid of fellow tourists). All the bad reviews I read online are probably from people who want to be “travellers” without beings  “tourists”, when in reality that is totally impossible. The “real” travellers will embrace what it comes on their way, and that includes being “tourists”.
But the time I returned to Bangkok, it was 2 pm, so I was then ready then to leave to the next city: Ayutthaya:

Ayutthaya is a historic city, 80 kilometers north of Bangkok. It was founded in 1350, and it was the capital of Siam (Thailand former name) until 1767. The Ayutthaya Historical Park was declared a UNESCO World Heritage Site in 1991.

There are quite a few options to arrive in Ayutthaya from Bangkok, they all depend on how comfortable or cheap one wants to travel. My idea was travelling by train, but I read online that trains were very slow and often delayed. It looks like there is also a minivan service departing from Victoria Monument that is cheaper and quicker than buses or trains.

In the end, I followed my instinct and decided on the train, since I was not in a hurry after all. I head off to Hua Lamphong Bangkok Train Station. I walked to the counter names “for foreigners”, the train ticket to Ayutthaya in second class cost me 15 bath (£1.50, COP5500), which included seat allocation. 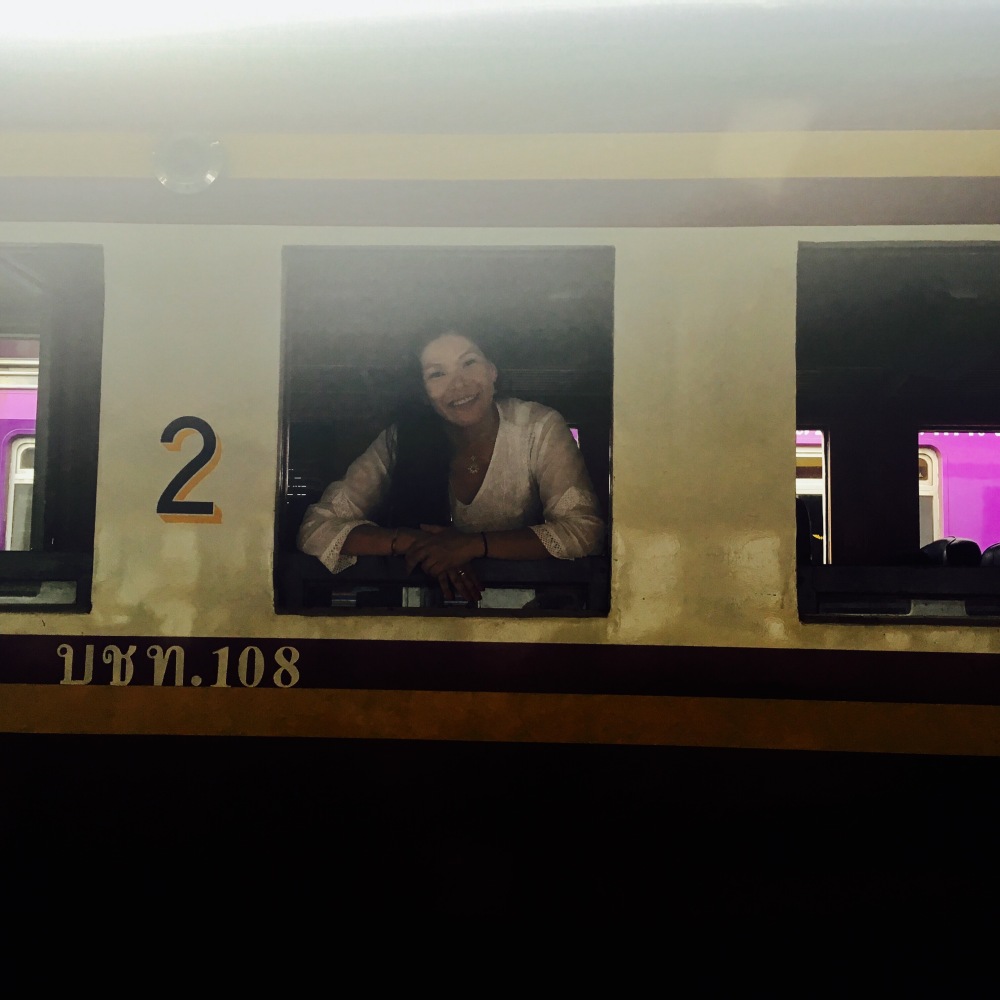 The train left perfectly on time, 3:30 pm, the journey took 1hr 40 minutes, no delays, comfortable seats, and several train vendors shall I had wanted to buy some water or snacks along the way. Absolutely no problems whatsoever or complaints from my side. A memorable journey in my head this was.

Upon arrival at Ayutthaya rail station, I realised I was still not sure which hotel to stay, so I had two options, one which I discovered in the Lonely Travel guide and the other one I found in my hotels.com app. I decided on the second one. I promptly grabbed a tuk-tuk and left. Luckily, they were rooms available, (this hotel has only 9 rooms).  I did the right choice since this is a wonderful little hotel, served by her native Thai owner. If you ever go to Ayutthaya, consider staying there, this hotel is run in the way that real hospitality is meant, its name is Silp-pa, and it is a 15-minute walk to the sites.

That was my day! Thanks again for reading!