Last February 12, life smiled at me yet again, as I was lucky to be invited to a beautiful hike through a natural reserve near to Bogotá:   Chingaza National Natural Park.   Full day activity that included a 4-hour walk inside the protected area.

Our excursion started at 7am when our tour company pick me up at home. Our guide, Hugo and his friendly driver, William, arrive very punctual. Later my friend Tito also joined us as well as the lovely Emilse as the assigned Corpo-Chingaza interpreter-guide, to teach us about the park. She told us that the path that we will follow is via the route of Santa Maria de las Lagunas, better known as the route Lagunas de Siecha, where we can appreciate the flora of the Páramo, including the splendid frailejones. 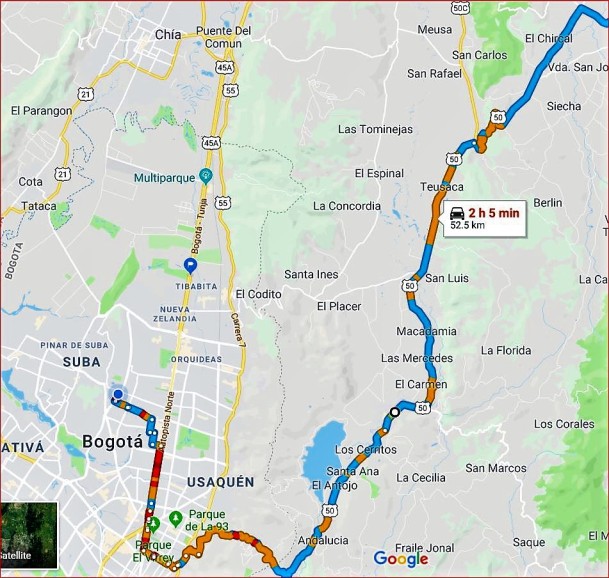 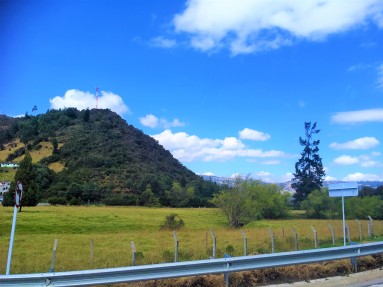 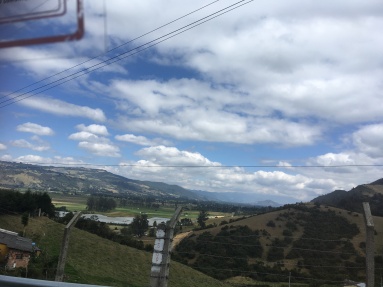 Llegando a Guasca
OUR DAY:

Due to the terrible traffic in Bogota, it took us two and a half hours just to get to La Calera, when normally this would take no more than 40 minutes. Hugo told us that there is an alternate route, via Hacienda Marques, through the Codito area, where La Calera is reached much faster, but for security reasons in that area, this route is largely ignored.

The Chingaza National Natural Park, it is considered a native treasure, by contemplating its mountains you can feel even the charm and secrets of our ancestral cultures:   the Muiscas and the Guayupes, indigenous people who lived in this territory.

The páramo is known as the force of water! and includes among others the Chuza Reservoir, which provides the water we drink in Bogota, which by the way is one of the purest waters in the world !!!, the park is also home to endangered species and vital ecosystems.

Currently, this area is a protected national park, which serves as a refuge for majestic ecosystems of Andean fauna and flora.

After 10am, we passed through Guasca and near the El Ensenillo forest reserve, until we found the deviation towards the entrance to the park, where we continued on the uncovered road. Around 10:50 am we reached the point where parked the car. 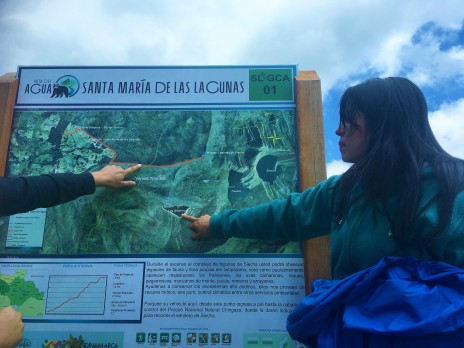 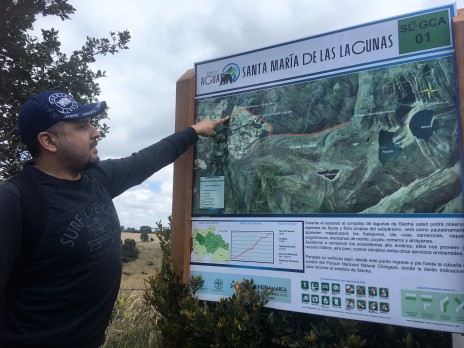 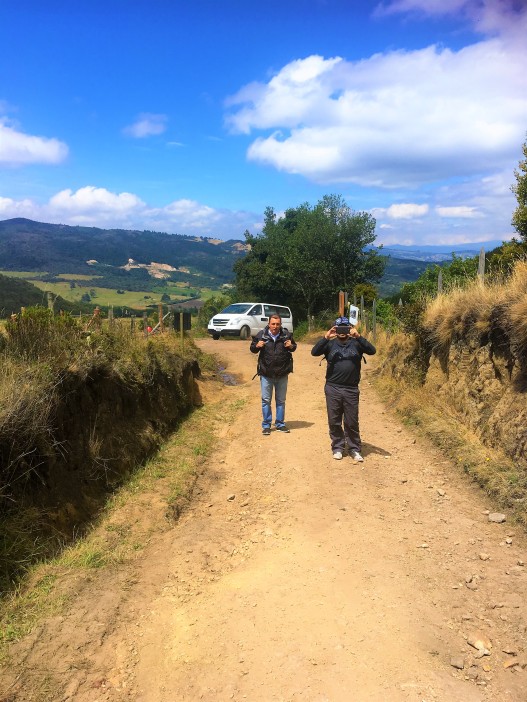 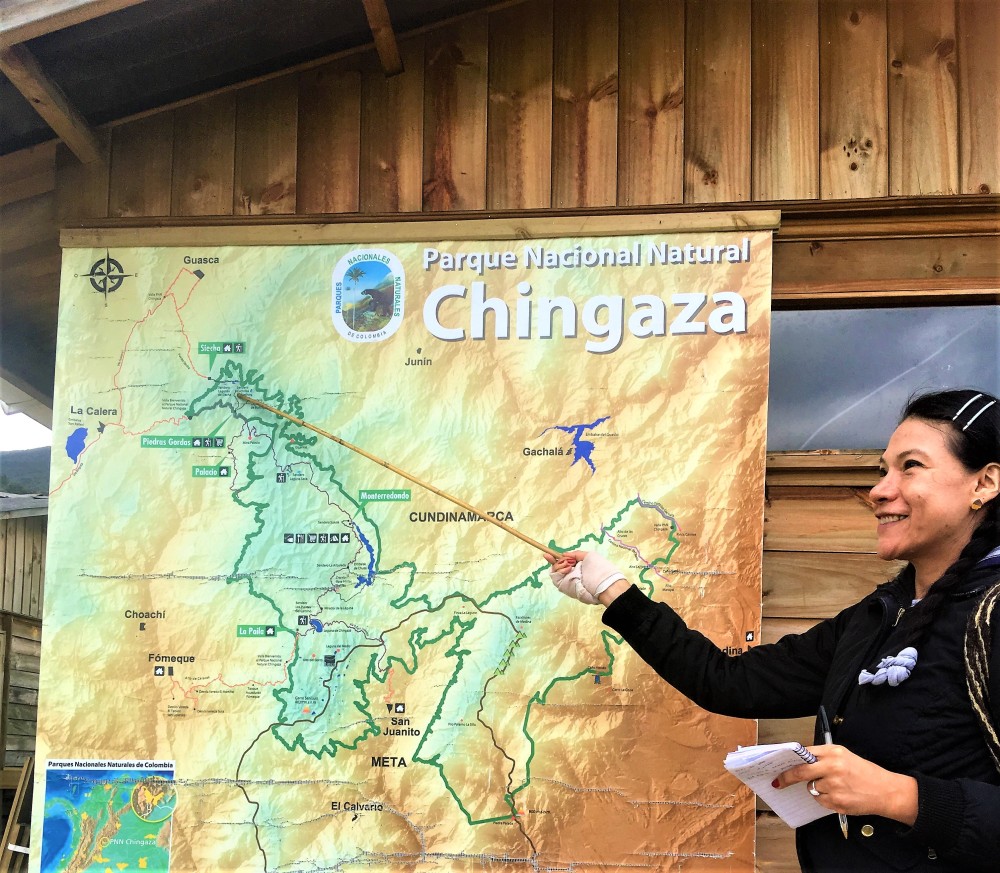 Chingaza Park is part of the 60 protected areas that make up the natural national parks system of Colombia, seen from the air, the park has the shape of a butterfly.

It has more than 76,000 hectares and is located in the eastern mountain range, northeast of Bogotá. The park has two wings, the western wing that is dedicated to ecotourism where visitors have the option of hiking seven different trails, ours today as I mentioned earlier, is the Lagunas de Siecha trail, gateway to Guasca.

And the eastern wing towards Piedemonte, which is strictly for research and investigation. For instance, they are currently studying the monkey churucu, which is on the list of endangered species.

Emilse told us that the park has a population of approximately 70 Andean bears, also known as the spectacled bear. Other fauna includes white-tailed deer and soche, curies, cusumbos, rabbits, condors and other birds. That’s when I start to get excited about the possibility of being able to see these animals. The bears are herbivores with some scavenging bears exceptions (20% of them), therefore, and according to Emilse, they present no risk to humans. The male can reach 2.20 meters and the female 1.65 meters. 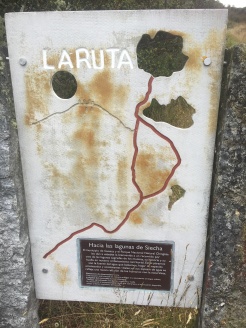 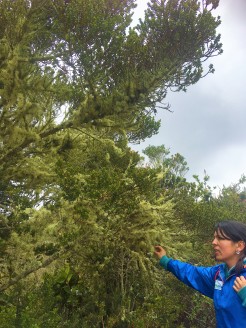 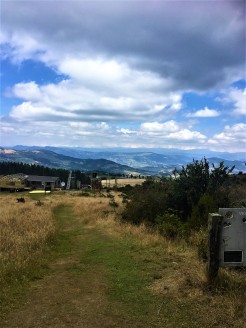 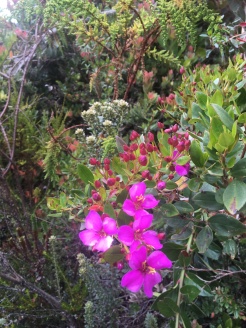 “7 cueros”
So, we started our hike up the slope of the mountain with the aim of reaching the viewpoint, which is 3700 meters high.

During this ascent, we had the opportunity to observe and learn from the park’s fauna, with its fabulous colours, I could not help but take too many pictures! Here simply some: 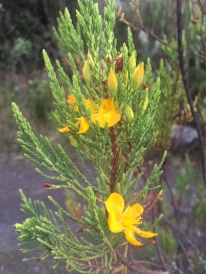 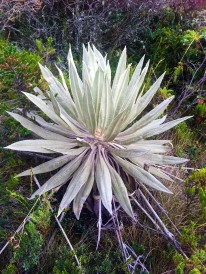 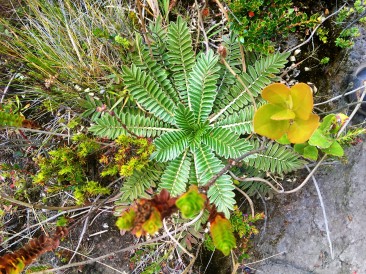 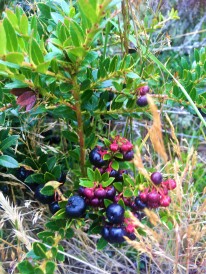 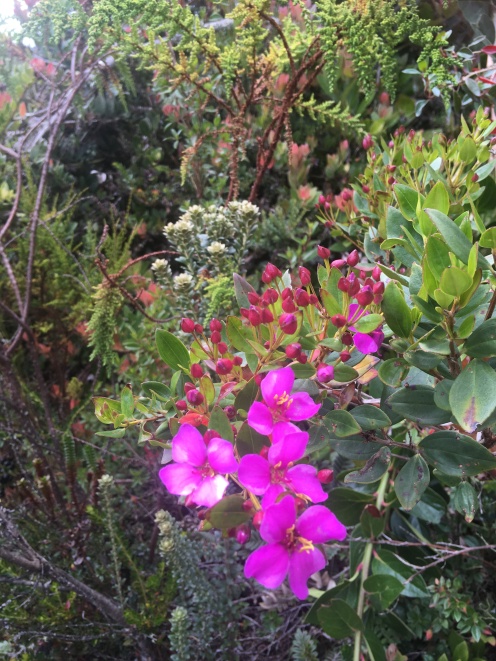 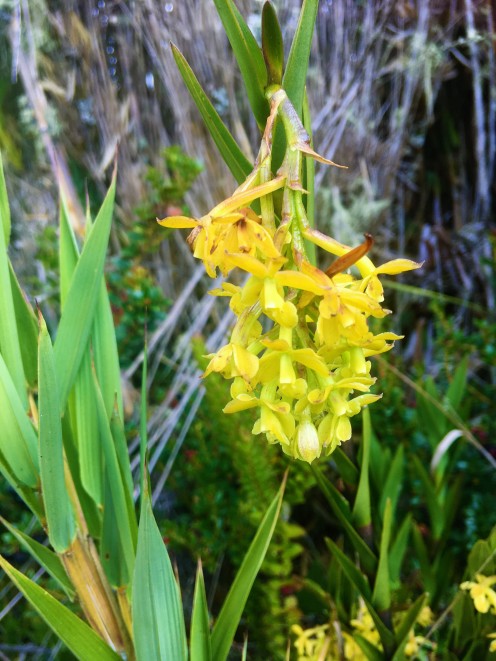 We also learned that the Muisca princes were called:   Guaches and the princesses were called Guarichas!   A very different connotation is understood nowadays by these two words! ask any rolo! (people from Bogota).

Just before reaching the viewpoint we found a depiction of   “ Tejido Muisca “a representation of the solstices, the Muiscas, as well as many other cultures of South America, were exceptional astronomers. They divided the calendar into four periods. 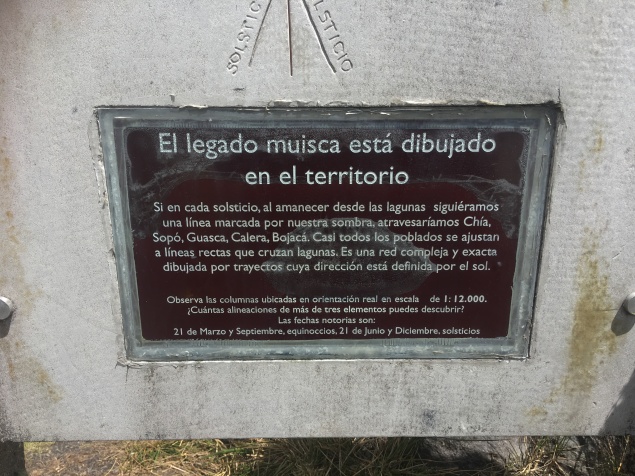 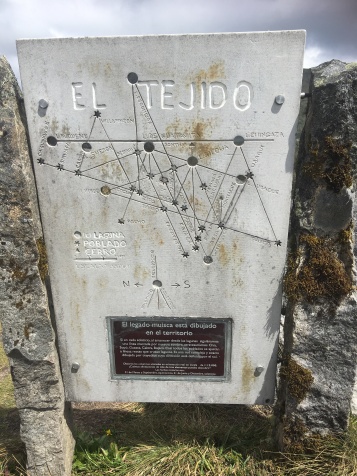 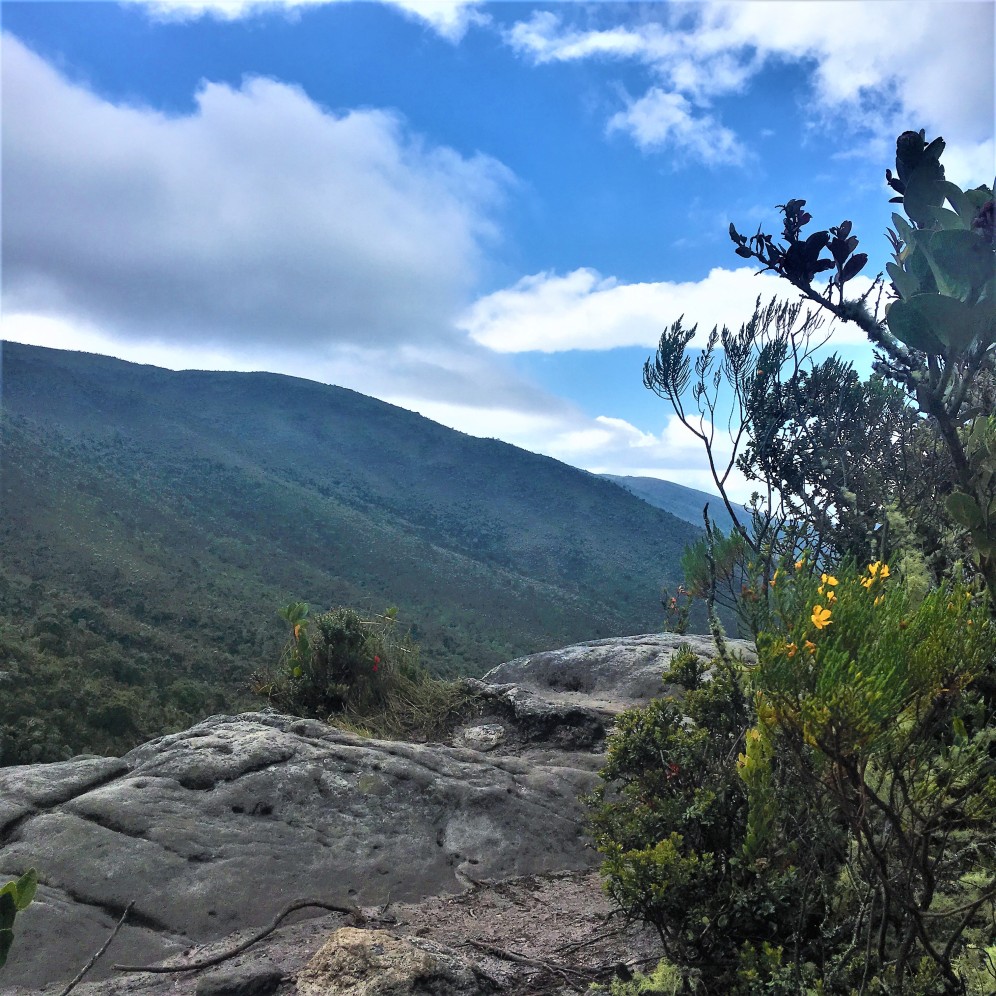 We then continued until we reached the viewpoint. In total, the ascent took us two hours and when we got there we could clearly see the stunning view of the three lagoons and the famous “cuchillas del Siecha” (Siecha Blades), nickname given to these mountains due to their sharp blades appearance. Our guides told us that just behind these mountains there was a limestone mine that was exploited by the Samper family years ago, but now it is abandoned, leaving behind some peculiar ghost stories. 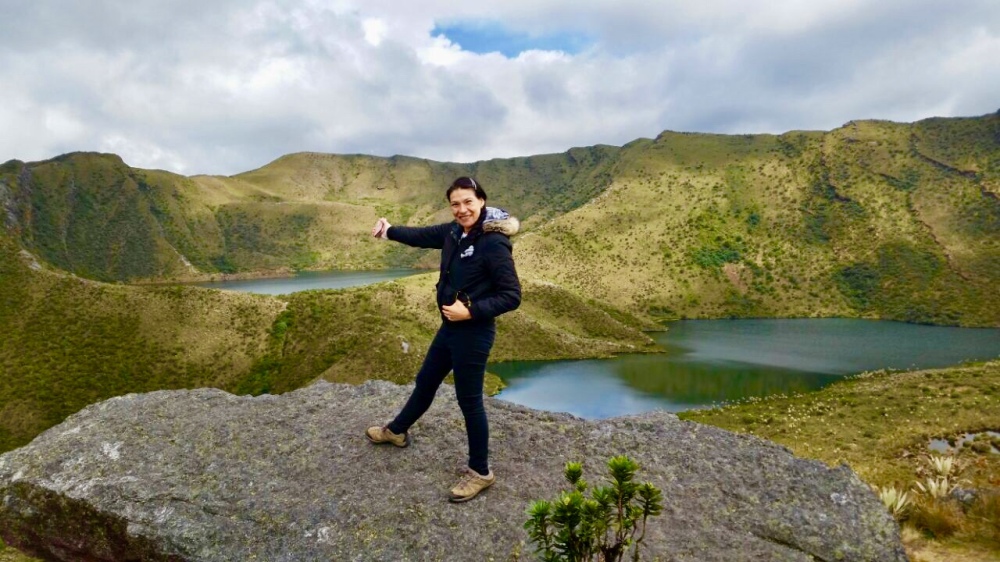 In view of this remarkable landscape we decided to have our lunch there, while we learned a bit of the lagoons: 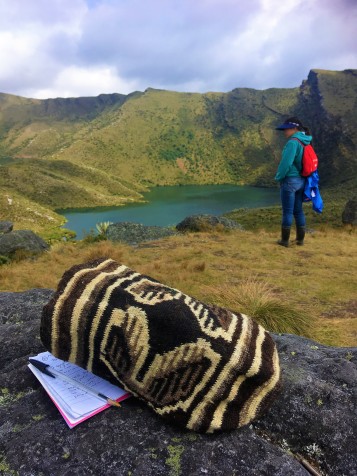 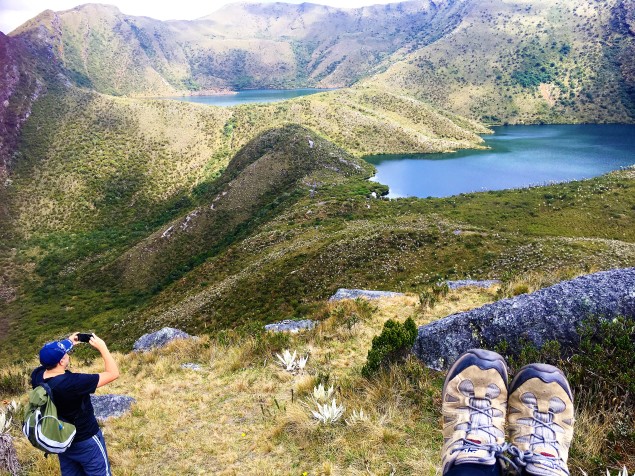 The first lagoon is known as American. This is the smallest because it is already clogging and becoming a wetland. This lagoon is also known as children lagoon or Guachaquiti.

Then we continued getting closer to two of the lagoons, to observe more thoroughly the magnificent frailejones. After contemplating for a while, we   started our return, descending through the lower part of the slope.

During the descent we had the chance to appreciate more fauna, such as the beautiful purple “lupinus” purple flower, known also as “Guargüero” and other fabulous views, to finally get back to the registration office at 3:15 pm. 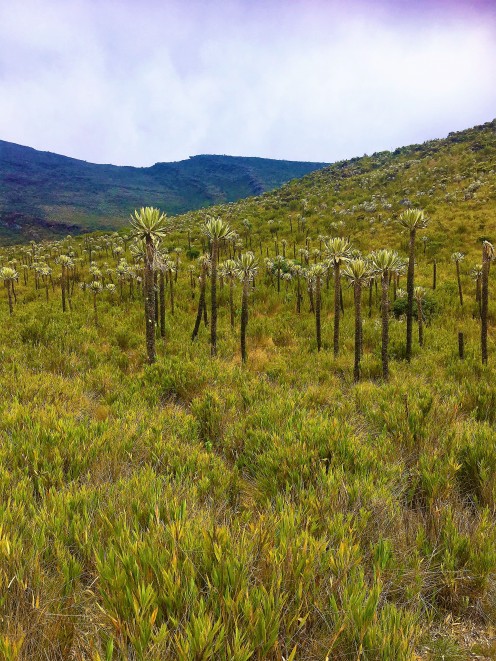 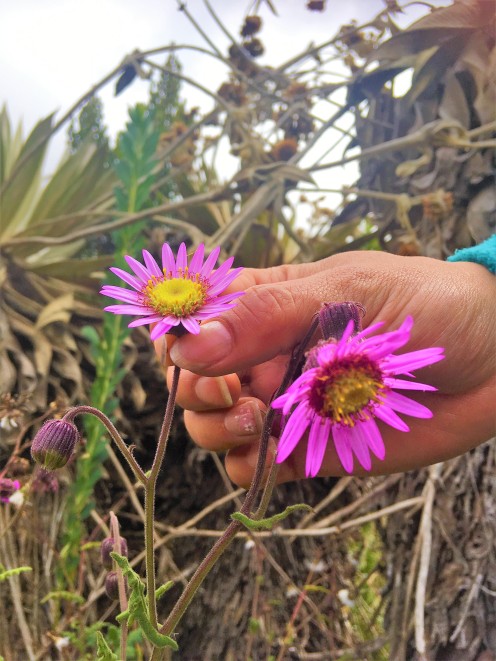 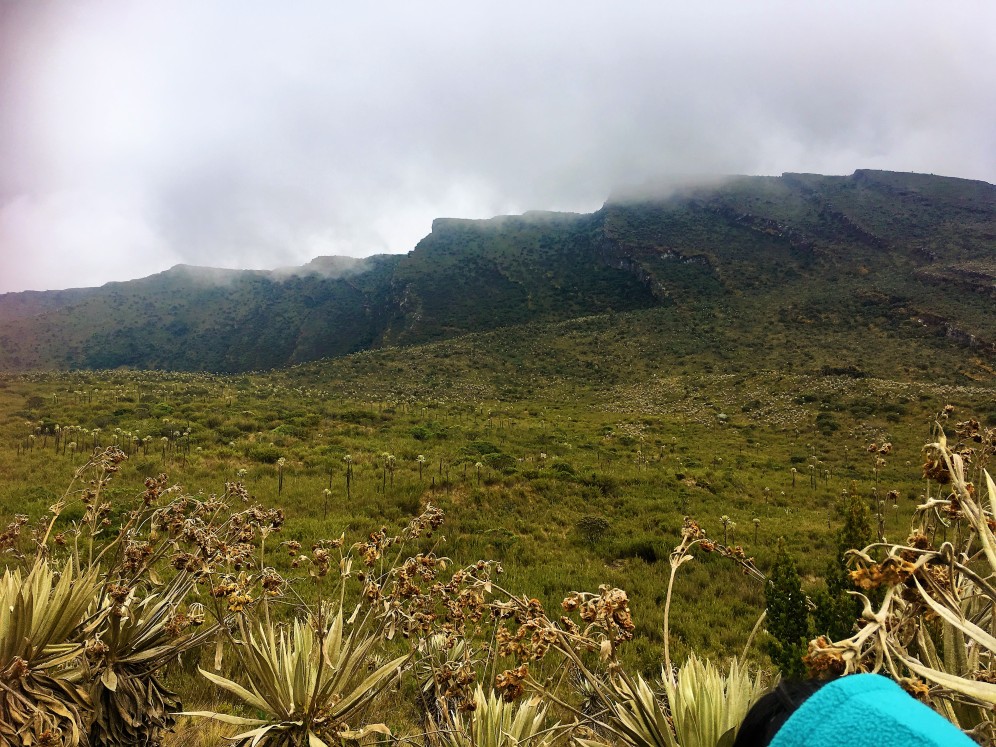 On our way back to Bogota, we stopped for a coffee at a very traditional bakery called “Los Corales” which I highly now recommend, here you can find fresh and delicious handmade bread (I even found bread without egg or gluten! The, group picture and special thanks to our guides for this beautiful experience. 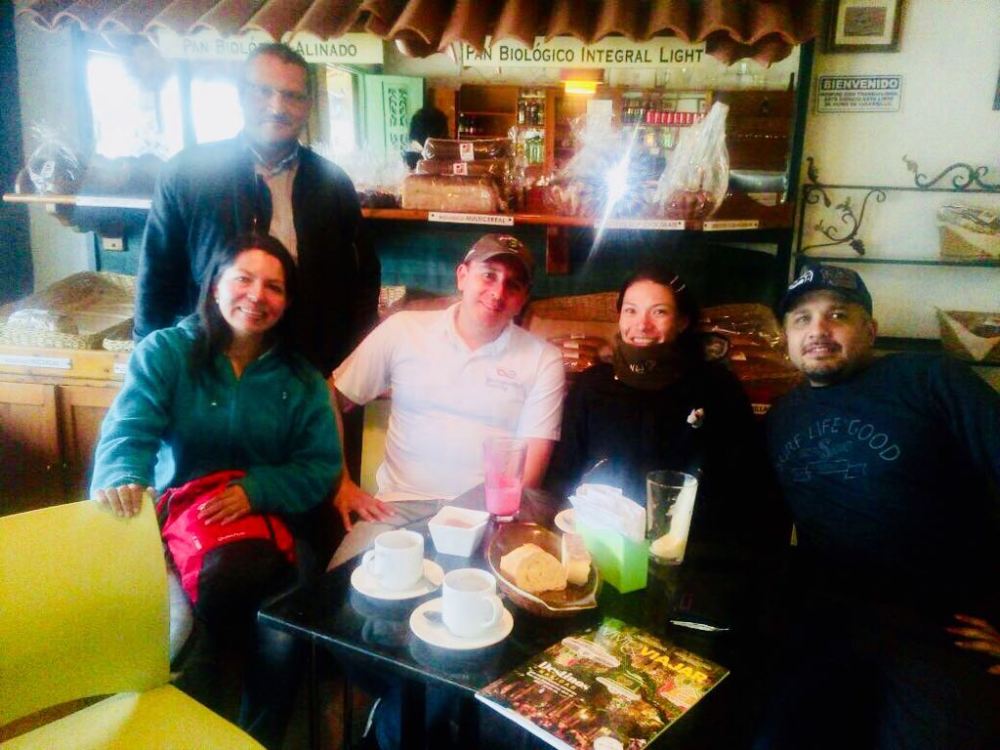 The return we had to wait in Guasca around 20 minutes due to expansion works of the eastern perimeter road.

Rules and recommendations for visiting the park:

“There is nothing better than the smell of clean earth, with the exception of the fresh smell of small plants after a rain …. Frances Hodgson.”